From Digital Masters World
Jump to navigation Jump to search

Tentomon is an Insectoid Digimon whose name and design are derived from the ladybug (瓢虫 Tentoumushi?). It is the original type of Insect Digimon who, although it has a hard shell, still has low aggression. It has one hard claw on each of its fore-legs, and four on each of its middle- and hind-legs, and in particular, the middle-legs are able to skillfully grasp objects just like a human hand. Although the other Insects at its evolution level only possess fighting spirit, it still retains its naturally friendly sentiments, and displays its carefree way of life by doing things like sniffing the scent of flowers and napping in the shade of a tree.

Like a ladybug, this Insectoid type Digimon is covered with a hard shell. Ultimately, it will evolve into HerculesKabuterimon by merging DATA from Kabuterimon and Kuwagamon. 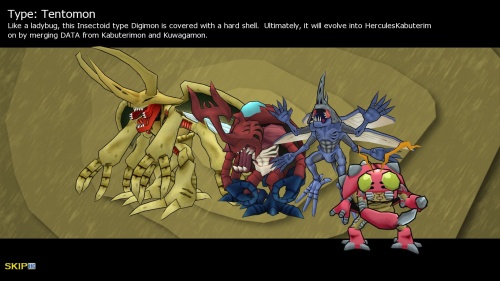